Some Exciting News for Me and a Mailing Date

First off, a mailing date: I will mail all Parts 2 of Mystery in a Corner after the 4th of July holiday.
We have some beautiful examples of Part 1 in my Shining Needle Society classroom, and again, I extend an invitation to you to come and join us. Membership is free, just write to KateGaunt@aol.com and Kate will issue you an invitation.

I wanted to take this chance too and tell you that I have some Exciting News which I will talk about after July 1st. Why after July 1st and not right now?

I will explain that later also...

SEE you back on My Blog after July 1st.
Gay Ann
Posted by Gay Ann Rogers at 8:41 PM No comments:

A Donation for EGA 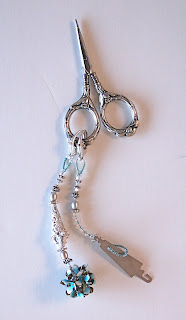 There are a number of people to whom I can't say no, and one of them called me asking for a donation for EGA's 50th Anniversary. I decided to look for a pretty pair of antique scissors and make a scissors fob and threader fob for them. I just finished and I want to keep them! So I decided to take a photo and 'keep' them that way.

The blades of the scissors are marked 'Germany' and most people assume they are German. They aren't; they are American. Companies here imported German scissors blades then made little sterling handles to fit with the blades. The handles here are marked 'sterling' usually a good indication that the silver is American. Even without the marking, the style is American, c 1890-1910.

They are so pretty, with little flowers and vines around the finger rings. An added bonus is that this pair are sharp and cut well! I am such a sucker for these little scissors and I buy them whenever I see them.

To personalize them, I beaded a scissors fob and a threader fob for the handles. A couple of years ago the owner of a little estate jewelry shop here sold some remarkable beads from the 1920's to me. She said in all her years in business she had not seen beads for sale like them and I would likely never see them again. I have a small and treasured box of these beads and I used two of them on the scissors fob. They are the long white bead and the flower-like bead at the end. The beads are metal and if you look carefully, you will see tiny rhinestones sprinkled on them. They are, as I said, remarkable beads!

So I snapped a little photo of the scissors and fobs and I will send them off. I wonder where they will end up. I hope in a nice home. And I will enjoy the photo of them as a memento.

Gay Ann
Posted by Gay Ann Rogers at 7:52 AM No comments:

Mystery in a Corner: a Great Commentary on Part 1 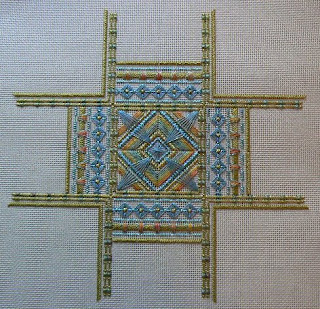 Pierrette is a member of Shining Needle Society and has been posting comments in my classroom there. She just emailed me the photograph I have posted here, of her newly-completed Part 1 of Mystery in a Corner.
Pierrette asked Pam Douda and Kim Propst (Tomorrow's Heirlooms) for help with the colors and then she documented each step of her progress on her blog. For a great evolution of Part 1 of her Mystery in a Corner, visit her blog:
http://www.lovetostitch99.blogspot.com/

I wanted to add this one too: Jeanne sent me a link to her very pretty Part 1 of Mystery in a Corner. If you would like to see it go to http://juststring.blogspot.com/ and scroll down.
Thank you for the link, Jeanne.

Mystery in a Corner and Shining Needle Society!

Registration for Mystery in a Corner is closed.
I will wait a few days for mail stragglers and then begin class at Shining Needle Society.

If you would like to join and follow along the discussions on Mystery in a Corner, write to Kate Gaunt (KateGaunt@aol.com). Membership is free. Kate will issue you an invitation.