Like most collectors I enjoy surfing on eBay. Some time ago I started a page on my website where I mention eBay listings I find and like and think might interest Queendom Website's followers. To date I have posted mostly scissors. I have a true scissors fetish, no doubt at all.

A couple of days ago I found an unusually long list of America's noteworthy thimbles for sale. I haven't seen this many of the famous thimbles for sale for a long while, so I wrote on my website a feature about thimbles. I put them on my home page, I've now done 2 pages of thimble listings from eBay, and I've written a long long column of comments on the vagaries of thimble prices. It was like a stroll down memory lane for me, as I spent the better part of 3 years writing about American Silver Thimbles.

Back in the relative dark ages when I was writing American Silver Thimbles, I knew each one of the thimbles and could tell you who made it. Now? Well, I confess I remember a surprising number of them and who made them, but I don't remember how to spell the names any longer. I had to check my book to see how to spell one of the most noteworthy of the American thimble makers, Ketcham & McDougall. The spelling of their names aside, wow, what great thimbles they made!

If the thimbles now for sale on eBay don't encourage a thimble collecting fetish amongst my followers, I give up, can't be done.
Whether you want to collect thimbles or not, do take a few minutes to look at them and enjoy one of America's smallest art forms. www.GayAnnRogers.com

Enough chatting here about them. I will leave the details to my website, save for one last comment: will I indulge in one or two of the thimbles for sale? Most definitely! I bought my first one tonight. I thought it was a terrific buy and I will likely be back for a second one and perhaps a third. Which ones? Hmmm, let's see how the auction goes for now....

Fun and games in the thimble world, that's for sure.
Gay Ann
Posted by Gay Ann Rogers at 8:46 PM No comments: 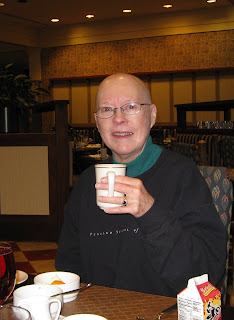 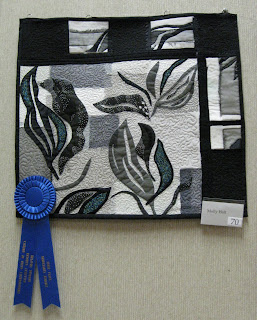 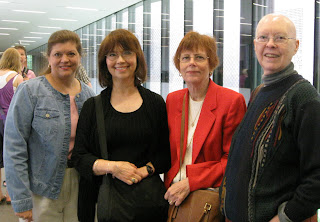 On Thursday evening our needlework world lost one of the bravest people I have known. Molly Holt died peacefully after a near 25-year-long battle with cancer.

I don't remember when I first met Molly but I would guess that Betty Chen Louis introduced us. I don't remember largely because Molly has always been such a big a part of the needlework world as I've known it. She was a regular at most guild seminars and I cannot remember a time I didn't see her at Callaway.

Molly was one of those students who made needlework a better, livelier and more inventive place. Not content to work on designs from others, Molly was a leader in studying design and color and the application of both to needlework. She studied memorably with Wilcke Smith, Jan Beaney, Jean Littlejohn, Pam Godderis and Charlotte Miller. Last year at EGA she applied and was accepted as a member of Fiber Forum, EGA's more experimental group.

Last January at Callaway I saw what I thought was such a worthwhile culmination of Molly's expression in a piece she displayed in the Callaway exhibit. It was her artistic look at her battle with cancer and it so impressed me that I posted a photo and her artist's statement on my website homepage. In honor of Molly I have re-posted the photo of her piece (above) along with her artist's statement (below).

We who knew Molly will greatly miss her and her influence on our embroidery world, although I suspect her spirit will remain close to many of us, urging us to try harder, be more experimental, look at alternatives and stray from the easy. So I won't say good bye to Molly. She will stay and help us all in memory and in spirit.

Molly's artist's statement follows, below. The photo of Molly sipping coffee was from Callaway last January; the photo of Kate, Rivers, Lee and Molly was from our day at 'The Birth of Impressionism' at the DeYoung in San Francisco when we were all together for the EGA Seminar in September.

In September 2009 my breast cancer was found to have suddenly metastasized into my liver. This piece was begun in early July of that year, a time when the cancer was actively moving, but I was not yet conscious of its presence. However, I believe my inner artist WAS very aware of what was happening in my body and that this piece came out of that awareness.

The first layer of the piece uses plain sheer fabrics to create a geometric design of recto-linear shapes. These represent the underlying strength of my overall health, although if you look closely, some of the edges are beginning to fray here and there. The second, top layer of fabric is created using both plain and printed sheers and some solid cottons as well. These very organic, slightly sinister shapes writhe and mover over the geometric surface beneath and represent the cancer cells. The machine stitching moving around the organic shapes is the chemotherapy I'm currently undergoing engulfing and attacking the cancer cells.

There are two border areas made up of black areas machine-stitched and design without the machine stitching surrounding them. Are the borders prologue, representing the time before I began treatment, the chemotherapy "lurking" and waiting at the edges, the cancer cells not yet as large or full of movement, the underlying health fraying further? Or are they the epilogue, what remains when the chemotherapy is withdrawn? That remains to be seen, but I believe my inner artist knows.

This piece was begun in a class with Maggie Weiss. She challenged us to work in black and white, although in the end I chose to add a bit of color for emphasis -- and perhaps hope. Maggie further "assigned" us to do our underlying layer as a geometric structure and the top layer in organic shapes. The shapes were to be in three sizes and have cut out areas. The design itself was left entirely up to each student.
Posted by Gay Ann Rogers at 5:20 PM No comments:

I have been absent from writing on my blog because I have been steeped in Mail Jail for E-Week's sales.
Now, after a month in Mail Jail, I have reached my last dozen orders and this morning I put out an official call for mistakes in the orders I have filled. Time to start mopping up and soon time to move on.

Next come the kits for my final travel-teaching job at Callaway in January and for my job with Pat Correz in the spring.
And after that? The beginning of my small dream for Queendom Website.

Actually my small dream begins this weekend for I am driving on Saturday morning up to my framer (the noteworthy New Creations Framing in Pasadena) to pick up a sampler called 'Iron Wrought in Silk'. Iron Wrought in Silk marks the beginning of the dream, let's say Part 1, so needless to say I am excited to see how the sampler looks and to begin work on a bit of magic for it.

So when will my followers catch a glimpse of Iron Wrought in Silk?
On Christmas morning, of course. A fitting time for the start of a dream, don't you think?

And when will the dream begin to happen? Well, not tomorrow, that's for sure. I have two more large samplers to stitch first and a long road of computer lessons to travel, so it will be a while. A while filled with a bunch of happy stitching and studying hours.

I am hoping the people who are in my general classroom at Shining Needle Society will keep me company as I stitch stitch stitch toward making a little dream a reality.

Gay Ann
Posted by Gay Ann Rogers at 11:32 AM No comments: